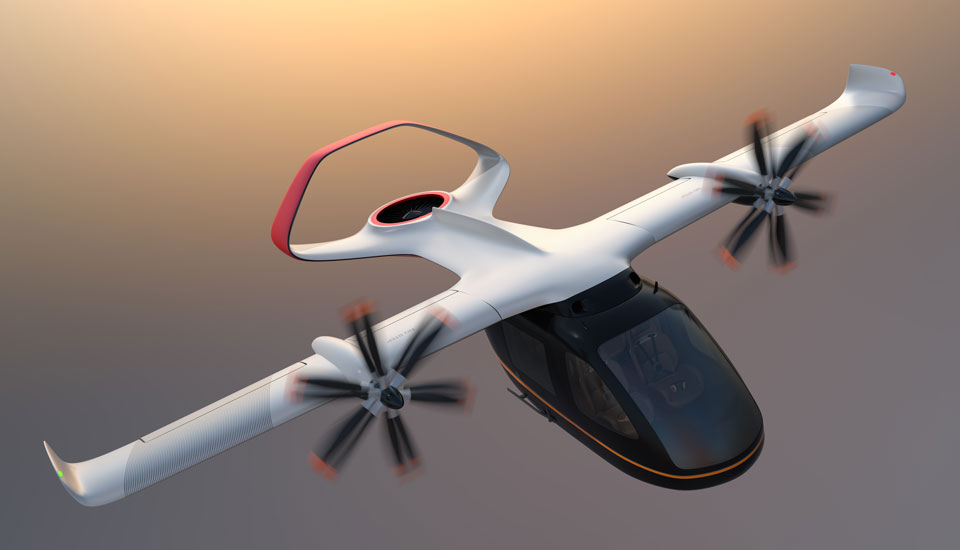 The market for Urban Air Mobility and Regional Air Mobility (UAM/RAM) is red hot. Globally, hundreds of fledgling startups are trying to impress potential investors with fancy renderings and promises of certification and commercial operations within a few years. Only time will tell if this is a realistic timeframe, and if all of them will succeed.

While some of these startups are backed by established aerospace and automotive companies that can provide engineering and manufacturing prowess, many are not. So how can these startups have a better chance of success with their first clean sheet design? The answer is quite simple actually: by fully embracing MDO (Multidisciplinary Design Optimization) in the design and engineering process. For those not familiar with MDO, it can be defined as optimizing a design, across multiple disciplines, within a set design space, by computer. Let’s take a closer look at some aspects of Electric Vertical Takeoff and Landing (eVTOL) aircraft development and the role of MDO.

In the conceptual design phase, the configuration of the aircraft gets laid out. Depending on its intended mission, designers will have to decide on what type of architecture will be used. Options include Tilt Rotor, Lift + Cruise, Multicopter or Ducted Vector Thrust. Some of these architectures include a traditional wing which provides for more range, efficient cruising and safety through gliding in case of a power loss. A multicopter offers better hover performance but typically has less range, and would need additional redundancy in its propulsion system, since it cannot glide or auto-rotate as traditional helicopters do.

By using fast running lower fidelity models in this stage for the relevant domains (geometry, structures, aerodynamics etc.), and integrating them in an MDO framework where objectives and constraints can be assigned, engineers can quickly evaluate thousands of potential design candidates and select the optimal configuration for further analysis in the preliminary and detailed design phases. 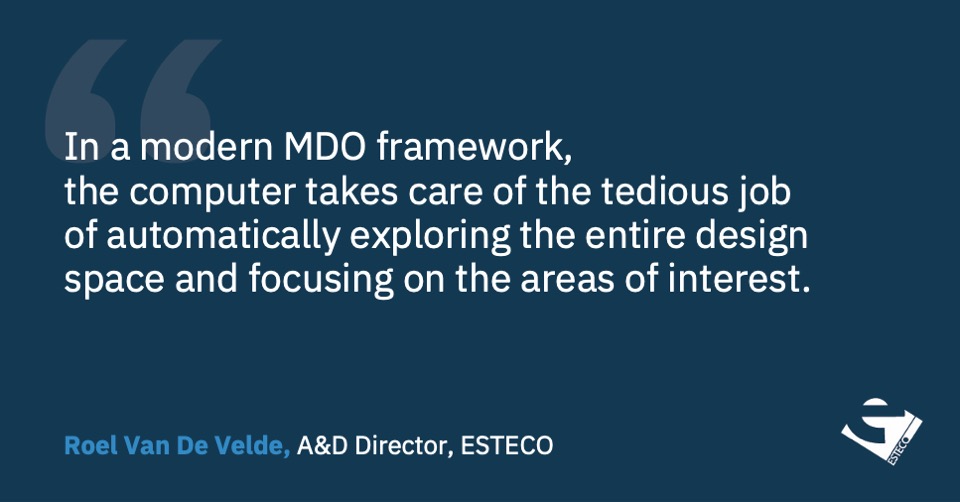 For the intended mission of the aircraft, engineers will need to understand the payload, range and speed requirements. This usually becomes an exercise in balancing competing objectives and conducting trade studies, which is what an MDO framework is all about. For example, we can choose to increase the payload, but at the cost of a smaller range, since the stored energy is finite. Conversely, we can choose to increase the range, but in turn accept a smaller payload.

With MDO, multi-objective optimization studies such as “maximize range, maximize payload” can be easily set up, and intelligent computer algorithms will then identify the so-called Pareto non-dominated designs, which engineers can use as a baseline for further development.

When it comes to the structure of the aircraft, attributes such as strength and weight are important from a crashworthiness and safety perspective. Since eVTOL aircraft typically have a higher mass growth factor than regular aircraft, weight savings and having a good upfront understanding of all the weight contributing factors are of high importance. Typically designers want to minimize the weight, yet maximize the strength.

While traditional aircraft are mostly made out of aluminum, eVTOLs rely heavily on composites since the structure needs to be as light as possible to compensate for heavy batteries and to allow for more payload in order to be economically viable. Material optimization and trading strength with weight and balancing that with payload is another good use case for MDO.

Propulsion System: Keeping noise down and performance up

Designing the propulsion system is probably the most challenging part of eVTOL aircraft design. Engineers need to consider battery energy density, cooling, electric motor performance and propeller or rotor design. Once again, many use cases for MDO present itself here.

For example, when it comes to propeller design, we can optimize the chord and twist distribution to get the maximum thrust and minimum power for a given set of airfoils. But we also need to consider noise, which is especially important in urban environments. Not only the absolute noise levels need to be very low, also the type of noise will have an impact on the acceptance by the public. All of us are familiar with the screaming gear whine of traditional helicopters, and the annoying mosquito-like buzzing of small drones - neither of which are acceptable for eVTOLs.

The effect on noise of disc loading, blade location, shape and tip speed can all be studied with design of experiments, followed by sensitivity analysis to identify the most relevant factors, and further optimization of those. Reducing rpm to reduce tip speed to reduce noise? Count on having to use bigger, heavier motors to provide the increased torque required in compensation, which can snowball into a need for a bigger and heavier supporting structure (there’s that mass growth factor again).

All of this can be investigated in a modern MDO framework, where the computer takes care of the tedious job of automatically exploring the entire design space and focusing on the areas of interest, and doing so much more efficiently than human manual knob-tuning. 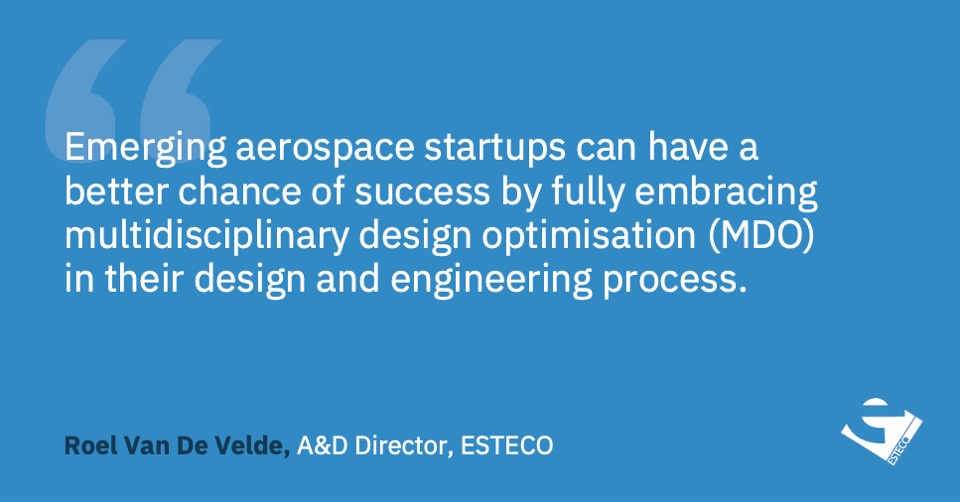 By now it should be clear that MDO has many applications and can offer a faster path to success. While individual disciplines require domain specific analysis codes (CFD for aerodynamics, FEA for structures, etc.), they can all be integrated in one and the same MDO framework.

MDO is agnostic and allows not only for optimization within the domain, but also optimization between domains where the goal is to find the best overall compromise.

MDO stimulates collaboration and can identify optimal designs that do not necessarily conform to an engineer’s gut feeling, which could otherwise easily be missed out on.

So what’s the advice for startups? While it is tempting and sometimes healthy to dream big and render eVTOLs that seem to defy every law of physics, we should not forget that whatever we develop is subject to stringent federal regulations and certification requirements. For creative but also proper engineering, investing in a good MDO framework such as modeFRONTIER (desktop) or VOLTA (web) by ESTECO would be a wise decision.

While many startups seem understandably more concerned with raising capital instead of spending it and therefore shy away from investing in software, it should be noted that commercial software vendors often offer attractive startup packages with significantly reduced license fees, and ultimately, the software pays for itself. Alternatively, one can find quite a few open source analysis packages that can be used free of charge, although they are typically limited in their application and not as user friendly.

What do some startups say?

modeFRONTIER optimization technology gave me the opportunity to think outside of the box. We could find a design that is completely different from what we’re used to, but that may work even better.Rok Lapuh, Aerodynamics Engineer at Pipistrel

A regional hybrid-electric aircraft - the first of its kind - requires complicated inter-disciplinary analysis. Designing for efficiency while not compromising on comfort and performance requires delicate tradeoffs with many considerations. modeFRONTIER makes it easy to set up complex, multi-disciplinary optimization problems.Ashish Kumar, Founder and CEO at Zunum Aero

Multidisciplinary Design Optimization of this aircraft is essential to its performance. We need a tool that improves team collaboration and gets the job done faster. VOLTA’s server-based framework allows team members to alter optimizations on a real-time basis and deliver the best overall performance. David Bogue, Chief Technology Officer at Otto Aviation.

We are witnessing an era full of buzz and excitement in aerospace, something that we haven’t seen for decades. Not only do we have a lot of activity in UAM/RAM, but also in hybrid/electric, supersonic and hypersonic flight, and commercial space tourism. It is probably fair to assume that out of the hundreds of startups working in these fields quite a few will fail. Redirecting some marketing funds into MDO capability would be a smart move to increase the chance of success.


This article was developed with insights by Adam Chase, former Powertrain Lead at Uber Elevate. Any errors, omissions or stated opinions are solely mine.