Aerospace, tear down these walls

The aerospace industry is ready for disruption.

After the Wright’s brothers first flight in 1903, the industry saw significant innovations and tremendous progress for sixty years.

During that time, many companies were founded and commercial aviation went from airplanes constructed out of wood and fabric that could accommodate a handful of passengers flying at a cruise speed of 80 mph to all-metal jetliners that were capable of flying hundreds of passengers comfortably and cheaply at 500 mph, high above all weather.

Commercial aviation became the safest mode of transportation. On the military side, open cockpit biplanes gave way to aircraft flying at Mach 3 and experimental aircraft capable of Mach 7. Oh, and while we were at it, we put men on the moon.

Armed conflicts were often a major driver for rapid innovation, with high risks, lots of failures but also big rewards. Inventions on military aircraft made their way to commercial aircraft. Massive progress was made during WW1, WW2 and the Cold War.

However, it seems that with the end of the Cold War in the late 80s, we’ve entered a status quo with no real drive for progress anymore, and mostly evolution instead of revolution.

The aircraft we board today are almost identical to the ones we boarded fifty years ago. Yes, they are quieter, more fuel efficient and may make use of new materials, but in essence, nothing has changed. The production lines for some military aircraft conceived in the 70s are still open today.

The only supersonic commercial aircraft in history has been retired with no similar-sized replacement planned for the foreseeable future. The latest iteration of a popular airliner has folding wingtips but the basic idea was first patented over 100 years ago. One could ask: Has the industry lost its mojo? 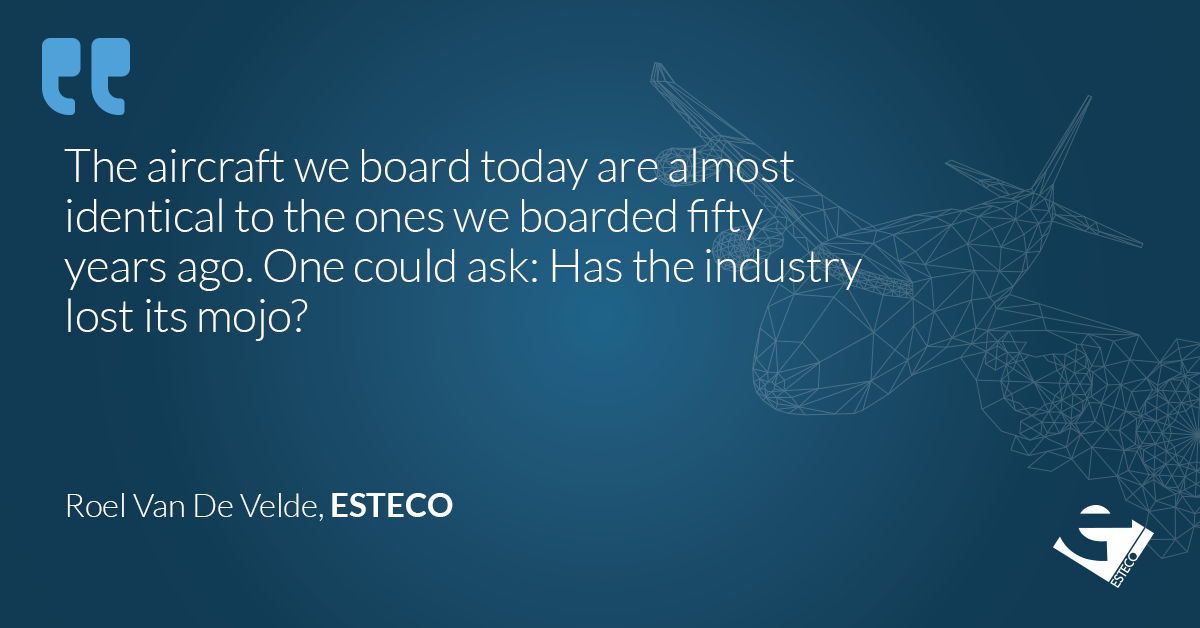 Consolidation in the industry contributed significantly to the current status. While there were about 10 companies offering mainline products to the global airlines in the 1960s, today we are down to 2 – Europe’s Airbus and America’s Boeing.

The only competitive threat they faced to their smaller short-haul offerings has disappeared with Airbus absorbing Canada’s Bombardier Cseries and Boeing entering a venture with Brazil’s Embraer. No viable products are coming out of Russia or Asia, although China and Japan are developing and learning quickly.

Things aren’t much better on the military side with currently only a handful of companies capable of developing and manufacturing the fighters, bombers and tankers of tomorrow.

An unfortunate side effect of consolidation is protectionism. Boeing and Airbus offer both military and commercial products, and for good reasons of national security, economic interests and pride, both companies have become too big to fail.

The US will always protect Boeing in the same way that Europe will stand behind Airbus. Most airlines today have a mixed fleet and continue to place orders with both companies, whether for reasons of economics, dependency or overall health of the industry.

However, this lack of real competition and protectionism has led to a slump in innovation. Combined with two popular mottos still very much alive in aerospace (“not-invented-here” and “we-have-always-done-it-this-way”) it becomes clear why we only see more of the same “tubes-with-wings” in the sky.

Recent new products are essentially decades-old designs, albeit with new engines and winglets for improved fuel efficiency. As we’ve seen lately however, putting a new engine on an old airframe that wasn’t initially designed for it may come with tragic and expensive unintended consequences.

For military programs, “more-of-the-same” is not so much the issue, but cost overruns and program delays are. They are the norm rather than the exception, and the government usually has no alternative but to increase funding.

Only breakthrough and affordable disruptive offerings can end this state. The industry has proposed several exciting concepts such as the blended wing and closed wing but none have made it into production, mostly due to fear of change, lack of willpower and lack of incentive.

Multidisciplinary Optimization and Breaking Down Silos

Simulation, multidisciplinary optimization (MDO) and collaboration in the engineering process will be critical to enable change, develop disruptive concepts and keep costs under control.

Computer-aided engineering can accurately predict structural and aerodynamic performance (and more) and has for long been an established and accepted design method, but in most companies, this is done in a very siloed approach where each discipline (department) only focuses on its own part of the overall design. 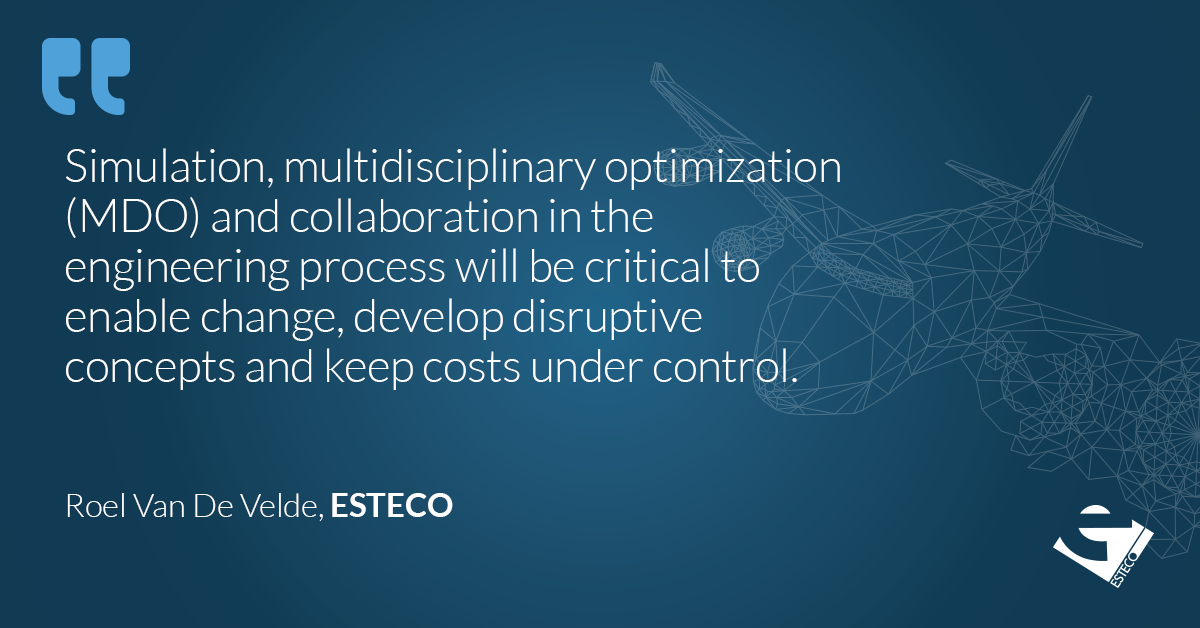 Bringing these simulation tools together in an overarching MDO framework will allow engineers and decision-makers to better understand the design space, take all disciplines into consideration, conduct trade studies, analyze design alternatives and ultimately decide on an optimal design configuration – which could look radically different than today’s aircraft.

A great aspect of MDO is that it may come up with designs that go against your gut feeling, but are superior in every aspect. MDO is not only about bringing computers, tools and processes together but also about bringing humans together, and the socio-technical aspects of MDO should not be underestimated.

Collaborating where one discipline gives up a bit of performance in order to achieve significant gains elsewhere should be stimulated and rewarded. In other words, those silos need to disappear. 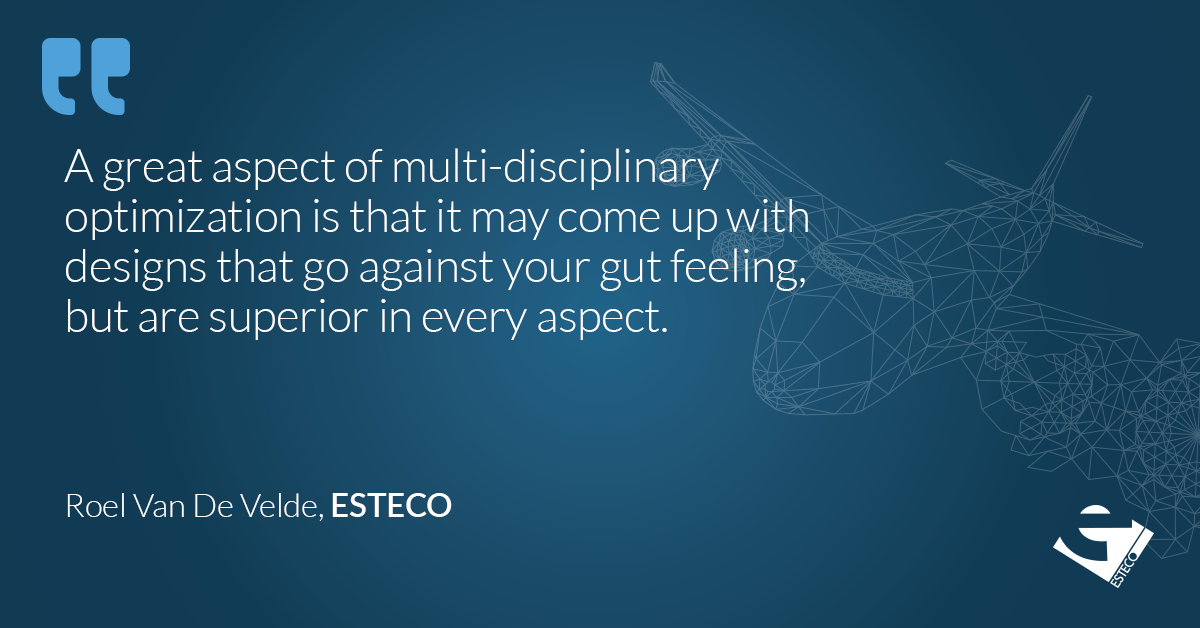 For MDO to be truly efficient it needs to be applied across the organization, not just on a departmental level, and this usually means buy-in from senior management (not only Engineering but also IT and HR) is required. However, this is easier said than done.

“We-have-always-done-it-this-way” - a point amplified when the aforementioned management was not exposed to MDO earlier in their careers.

Commercial user-friendly MDO technology has been around for only 20 years or so, meaning that most airplanes flying today were not engineered from the ground up using MDO.

A lot of benefit from MDO can be obtained early on in the design cycle using fast running lower fidelity models, when the aircraft configuration is laid out and design decisions are taken that will be difficult and costly to reverse later on. At a later stage, once more accurate higher fidelity models become available, MDO can be applied to further optimize.

Comparing industries, it probably is not surprising that most MDO usage can actually be found in the automotive industry, where shorter design cycles, more product lines, stringent regulation on fuel economy, emissions and crash safety, cutthroat competition and demanding consumers are prevalent. 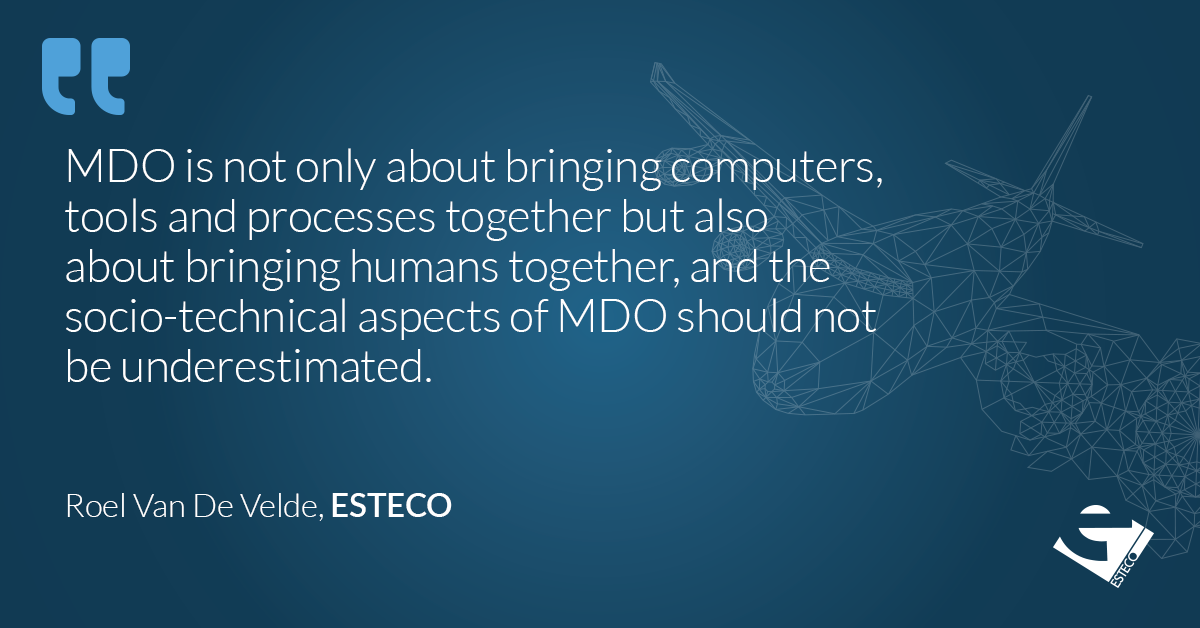 The dawn of a new revolution

The US government (Air Force Research Laboratory) recognizes that the challenge to design future military aircraft that are both revolutionary and affordable requires an integrated multidisciplinary approach to successfully navigate the relevant trade spaces to find the optimal design(s).

It has launched the EXPEDITE program, awarded to Lockheed Martin Advanced Development Programs, to expand MDO to include more disciplines such as cost, reliability, and manufacturability in the conceptual design stage.

ESTECO, as one of the program partners, has deployed VOLTA, a web platform for collaborative MDO, to not only integrate the different disciplines and run distributed-computer and distributed-geographic MDO but also to collaborate between prime, tier 1 and tier 2.

In commercial aerospace, exciting and much-needed change is coming, with startups and visionaries working on supersonic and blended wing business jets, hybrid/electric propulsion, autonomous flight, and urban air mobility. Some of them have received financial backing from the establishment, recognizing their innovations.

Most of these startups, often led by industry veterans who also yearn for change, employ young engineers who are not bound by legacy engineering best practices and are open to new ideas and methods. They have the opportunity to work on clean sheet designs, and MDO can and should be a big part of this development.

Let’s hope the old guard takes notice and goes back doing what it did so well in the first 6 decades: be bold, take risks, innovate and revolutionize, and get that mojo back.

The opinions expressed in this article are solely those of the author and do not necessarily represent those of ESTECO SpA or any of its subsidiaries and partners.