SOLUTION - In order to evaluate the merit of this proposed configuration, multidisciplinary optimization studies are performed to arrive at the minimum cost airplanes of maximum utility. Aircraft mass is used as a proxy for cost, and the extent of the latitude band the solar-powered design can operate in defines usefulness. At a given latitude, the aircraft must fly faster than a given wind speed in order to station-keep. The average 99th percentile wind speed across longitudes is arbitrarily used and the worst case between southern and northern hemisphere limits is takek. The framework is ported to modeFRONTIER a process-integration and optimization environment. A genetic optimization routine is then used to explore the design space and to derive the Pareto frontier. 150 generations are run with an initial population size of 230 (over 10 times greater the number of optimization variables). 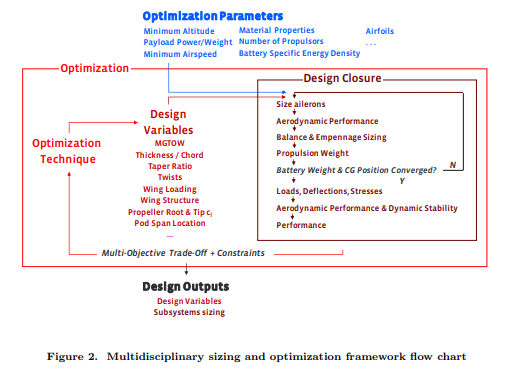 BENEFITS - Optimization results showed that the flying-wing configuration is stiffness-driven due to influence of body-freedom-flutter on the design. Studies showing the influence of typical active flutter suppression methods were also conducted. As shown, AFS has the potential to decrease aircraft mass by up to 10%. A more comprehensive implementation of the control design strategy will be beneficial to more accurately asses the extent of the envelope expansion and corresponding aircraft mass reduction.