CHALLENGE - The optimization of train movements could make the railway system even less impacting on the environment by reducing energy consumption and CO2 emissions. Only in a limited number of cases train drivers are assisted by the so called Driver Advisory System which suggests energy-eﬃcient speed proﬁles. However, this system uses insuﬃciently accurate algorithms which do not take into account the live traﬃc conditions. The real-time energy consumption minimization problem is a complex problem and so far not many methods have been introduced to handle unexpected events.

SOLUTION - The present study aims at minimizing energy consumption in both the planning phase, where train timetables are defined, and operational phase in which traﬃc may be perturbed by unexpected events. The Energy-Efficient Train Timetabling Problem has been considered in the planning phase with the objective of minimizing also the overall travel duration. Single multi-objective optimizations have been performed with modeFRONTIER by applying MOGA-II and MOPSO algorithms to search for the best possible set of solutions. These candidates have been validated using OpenTrack simulation tool and tested on two real case studies, the first based on a railway infrastructure provided by Bombardier Transportation and the second referring to a metro line in Istanbul.

The real-time energy consumption minimization, during the operational phase, has been addressed by defining a Mixed-Integer Linear Programming (MILP) model. The TDRC-MILP algorithm computed the train speed proﬁle  capable of minimizing energy consumption considering train routing and precedences as deﬁned by a real time Railway Traﬃc Management Problem solution. The algorithm has been tested on a real case which reproduces the French control area Pierreﬁtte-Gonesse which includes 16 trains and diﬀerent sets of routes and precedences. 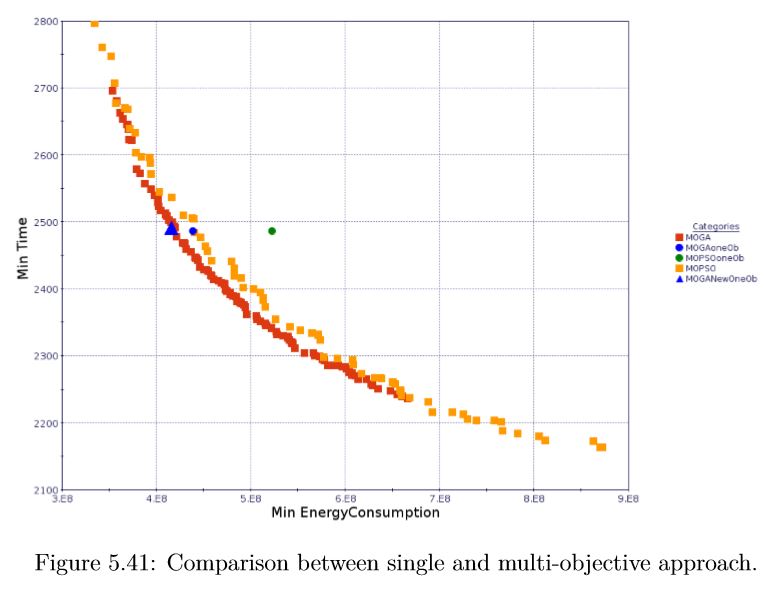 BENEFITS - The results obtained on two real case studies analysing the planning phase suggest that MOGA-II gives better results than MOPSO. The multi-objective optimization seems to find better solutions comparing the single objective approach. In fact, with the same number of iterations, it finds a better approximation of the Pareto Front that identifies solutions with lower energy consumption and minimized travel duration. The TDRC-MILP algorithm shows promising results for the real time energy minimization especially because the analysis considered a scenario involving more than 15 trains travelling concurrently, while existing methods consider at most two trains. The proposed method proved to be effective in dealing with an arbitrary number of trains circulating and irregular traffic conditions, hence encouraging in terms of potential to handle real world scenarios.​