Efficient global optimization (EGO) was applied to the multi-objective design and knowledge discovery of a supersonic transport (SST) wing. The objective functions considered here are employed to maximize the lift-to-drag ratio at supersonic cruise, to minimize the sonic boom intensity and to minimize wing structural weight, simultaneously. 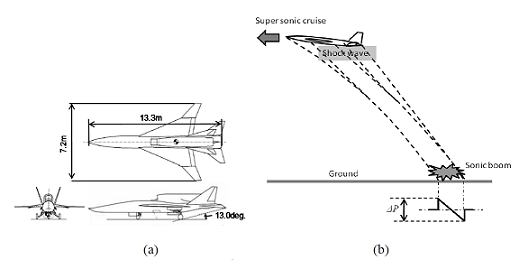 The EGO process is based on Kriging surrogate models, which were constructed using several sample designs. Subsequently, the solution space could be explored through the maximization of expected improvement (EI) values that corresponded to the objective function of each Kriging model because the surrogate models provide an estimate of the uncertainty at the predicted point. Once a number of solutions have been obtained for the EI maximization problem by means of a multi-objective genetic algorithm (MOGA), the sample designs could be used to improve the models' accuracy and identify the optimum solutions at the same time. In this paper, 108 sample points are evaluated for the constructions of the Kriging models. In order to obtain further information about the design space, two knowledge discovery techniques are applied once the sampling process is completed. First, through functional analysis of variance (ANOVA), quantitative information is gathered and then, self-organizing maps (SOMs) are created to qualitatively evaluate the aircraft design. The proposed design process provides valuable information for the efficient design of an SST wing. 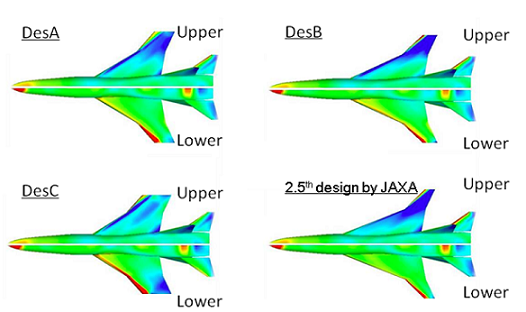 In this study, modeFRONTIER is used for the visualization of multidimensional data. modeFRONTIER  creates a map in a 2D hexagonal grid, which can be colored based on the every attribute values (for the design variables, and the objective functions). Therefore, the n component planes are visualized and can be compared easily. In the trained map, each hexagonal grid has similar vector to its neither. By coloring the grids by component values of the vector, the relationship among objective functions and design variables such as a ‘trade-off’ can be observed in the picture below. 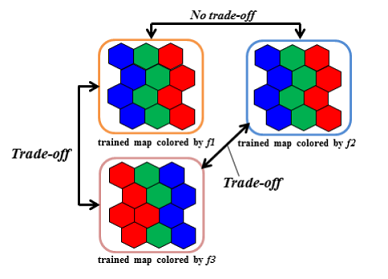 The total of 105 sample designs is evaluated and their results are used for design space analysis by proposed EGO procedure. In this process, GA is used along with Kriging surrogate models. To obtain non-dominated solutions, additional samples are selected by GA exploration based on EI values on the Kriging model. In addition, ANOVA and SOM are employed to acquire the information about the design problem. In this study, the main wing of S3TD conducted by JAXA was designed. Many additional samples become non-dominated solutions. According to this sampling result, trade-off among objective functions was observed. To investigate the detail of the design space, ANOVA and SOM are applied. According to these result, useful design knowledge can be acquired. According to ANOVA result, the inboard wing camber has a predominant influence on L/D. Additionally, SOM result suggest that larger outboard sweep back and thinner tip airfoil provide higher L/D wing, because outboard wing has supersonic leading edge. ΔP is influenced by the sweep back of the inboard wing. The design which achieves lowest Wwing has low taper ratio. Additionally, to reduce the aerodynamic force on the main wing, the reflection angle of the horizontal tail becomes positive where the horizontal tail wing also gains the lift. This knowledge could be obtained by the consideration of the trim balance constraint. Because it takes large computational cost to design the wing under such constraint, proposed design technique was highly efficient.