Traumatic rupture of the aorta (TRA) remains the second most common cause of death associated with motor vehicle crashes after brain injury. On an average, nearly 8,000 people die annually in the United States due to blunt injury to the aorta. It is observed that more than 80% of occupants who suffer an aortic injury die at the scene due to exsanguination into the chest. With the advent of more accurate and established human body finite element (FE) models, FE crash reconstruction methods may become a valuable tool when assessing crash scenarios and occupant injury mechanisms. The current study is divided into five main aims, near side left lateral real world finite element reconstructions, sensitivity study, thresholds for TRA, aorta mechanics in racing crashes and conceptual countermeasures. In the first study eight nearside left lateral impacts, in which a TRA occurred, were reconstructed using a combination of real world crash data reported in the Crash Injury Research and Engineering

Network (CIREN) database and FE models of vehicles and occupants. The average maximum principal strain (AMPS) in the root, ascending, and the isthmus regions of the aorta were calculated and model predicted high strain areas were compared with real world injury reports. In seven of the eight cases aortic failure occurred in the isthmus region and, the average peak tensile isthmic strain, 20±7 mm distal to the left subclavian artery, was 18±6%. To identify key parameters for injury causation, 16 Design of Computer Experiments (DOCE) runs, generated using a Latin square sampling technique on modeFRONTIER with FE models of vehicles and the WSHBM as described earlier were performed to evaluate the role of PDOF, impact velocity, impact position, impact height and occupant seating position on aortic strain, aortic pressure and compartmental intrusion. The AMPS decreased significantly with an increase in the PDOF (from 270 degrees). Of the four PDOFs simulated, a PDOF of 270 degrees generated the highest average maximum principal strain in the aorta. Further, strain increased with increase in impact velocity while pressure in the aorta decreased with an increase in PDOF (from 270 degrees). 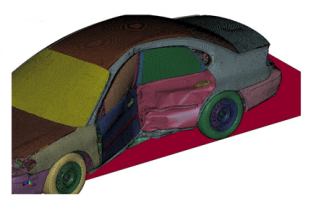 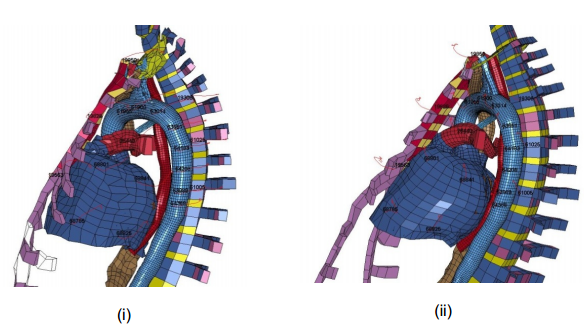 The data obtained in the CIREN reconstructions were further compared with three CIREN cases without aortic injury to understand and delineate the mechanism for TRA. A paired comparison based sensitivity study was carried out and data compared with literature. It was seen that in nearside left lateral impacts the PDOF of impact played a crucial role in TRA. Further, three Indy car based racing crashes were simulated as part of a comparison study involving nine other simulated cases. It was seen that for TRA to occur, acceleration along was not enough. Thoracic deformation was essential and the shoulder-clavicle complex played a crucial role in TRA by causing relative motion of the sternum and the thoracic spine. Utilizing six design factors; B-pillar beam, crossbeam, side conceptual blanket airbag, thickness factor, yield strength and by varying the dimensions of the B-pillar beam, 18 DOCE simulations were carried out. The current study suggest that the protective effects of an improved side-construction standard can be enhanced further by the more rational placement of an airbag-like structure, to buffer head and chest contact with the B-Pillar along its entire length from car seat to roof. It is suggested that the combination of these two safety measures, B-pillar beam and thickness is likely to result in a significant reduction in both head and aortic Isthmus injury and thus to substantially reduce mortality subsequent to lateral motor vehicle crashes.