Although the concern about environmental issues has led to the need of increasingly reducing fuel consumption of internal combustion engines, the desire of vehicles with higher and higher performance has never really waned over the years. A way to significantly improve fuel efficiency in automotive propulsion systems without making a major shift away from conventional internal combustion technologies is well recognized in the use of direct injection. In SI engines, in particular, GDI is today considered indispensable, as coupled with downsizing and turbo-charging. The present work is finalized to the numerical investigation of the advantages of split injection in a high performance GDI engine for two-wheel applications. The considered engine, single-cylinder, 638 cc displacement, four-stroke, four-valve, is equipped with a new generation high pressure six-hole injector. This last is first characterized from an experimental point of view as delivering gasoline both in a single pulse or in two successive events. Under double injection strategies, the dwell time between two successive pulses, delivering equal amounts of gasoline mass, is varied. A 3D simulation of the in-cylinder processes under split injection at high-load high-speed is performed. It is proven that, in these conditions, this kind of mixture formation strategy is not effective in improving the engine performance.

This paper also explains the numerical procedure that couples a 3D model of the in-cylinder processes to modeFRONTIER in order to study into detail a moderate-load moderate speed condition, where the air-to-fuel ratio is maintained lean. Both single and double injection events have been considered. The effects of the mixture formation process on the useful work produced by the engine are studied by formulating an optimization problem having the objective of increasing the computed pressure cycle area in the pressure–volume plane in the closed valve period. 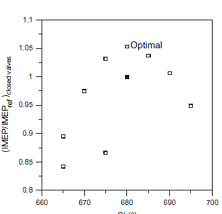 Optimal choice of the start of each injection event and the time of spark advance is realized by means of the Simplex algorithm in order to minimize the fuel consumption. The optimal solution pertaining to the double injection case has been shown to increase the useful work with respect to the case injection, thus confirming the possibility to resort to split injections to improve the quality of the charge stratification under lean operation. The pollutants formation is also affected by subdividing the gasoline supply in two parts. While a positive effect is observed on HC, the formation of NO suffers the enhancement of the combustion efficiency, hence the increase of the local temperature. The assessed procedure, where a properly developed 3D engine model is coupled with modeFRONTIER, has proved to be a valuable tool in the phase of engine design.