Composite materials are widely used in the aerospace industry for their high specific properties and are now being used in structurally critical components, whereby total failure of the component would lead to catastrophic failure of the aircraft. Designing with composite materials allows for large structures to be manufactured in one piece, such as an entire fuselage section. However, such a component becomes more difficult and expensive to replace when damaged, making repair the likely course of action. Therefore it is necessary to have suitable repair techniques which can return the damaged component to its original design requirements.

The standard scarf repair procedure involves removing material from a region surrounding a detected flaw in order to accommodate the repair. The repair plies are then layered and cured in situ, using identical materials, lay-up and curing method to the host structure. Optimization of the repair ply stacking sequence has been previously researched and it led to a stronger repair compared to a conventional design. The aim of this research is to further investigate the effectiveness of scarf repair optimization for minimum adhesive shear stress concentration by way of a genetic algorithm. Several key parameters are studied, number of plies, scarf angle, and optimization constraints, with focus on the practical aspects of the constraints. 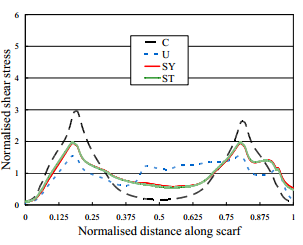 The scarf repair was modelled and analysed using the finite element analysis (FEA) packages MSC.PATRAN 2008 R1 and MD.NASTRAN R3c respectively. The repair was modelled as a 2D scarf joint under plane strain conditions. The optimization model was constructed in modeFRONTIER, using the multi-objective genetic algorithm (MOGA) solver present within the package. The FEA input file was imported into modeFRONTIER and each ply angle was modified as a variable. By optimising without constraint to the ply angles, a greater reduction in shear stress can be achieved. However, a more practical solution may be obtained by limiting the design space to repair stacking sequences that closely match that of the parent structure, without severe penalty to the efficiency of the optimization. The scarf angle of the repair and the number of plies within the repair do not significantly affect the efficiency of the optimization analysis.