A modeFRONTIER case study about the optimization of the windshield structure

CHALLENGE - DEMA SpA must assess the capabilities of a methodology for the smart analysis of the windshield structural behavior by using a FE (Finite Element) model integrated with modeFRONTIER for a new Canadian business jet. The method ology would be able to automatically change the thickness of the Global Finite Element Mode (GFEM) shell elements, run the new numerical analysis and finally obtain a configuration with a minimum mass target, but at the same time able to stay within a well-established threshold stress. The investigation was further developed to identify the best trade-offs between mass and stress minimization, enabling the selection of a wider range of potentially suitable configurations.

SOLUTION - A modeFRONTIER workflow represented both a data and a logical flow. The data flow began from the 16 input variables, whose values were updated in the Nastran model, and after the analysis of each design was completed the 2 output values were generated. This process was iterated repeatedly under the control of the initial DOE, followed by the optimization algorithm and using RSMs. In the second phase in the study, the optimization strategy was switched from mono to multi-objective for the purpose of identifying the so-called “Pareto Frontier” between mass and Von Mises stress, i.e. the best trade off solutions. 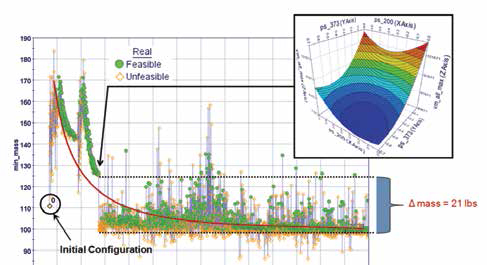 BENEFITS - The exploitation of modeFRONTIER allowed the analyst to evaluate several variables automatically with an informative and easy-to-implement approach. The multi-objective optimization provided a high number of feasible solutions that were evaluated by the analyst in order to achieve the best configuration taking into account also other important parameters (fatigue, interface, manufacturing, etc.). The modeFRONTIER workflow, enabling a complete automation of the whole analysis, allowed the maximum utilization of hardware and software resources (no CPU time wasted), and achieved a real cost saving.
LOG IN TO DOWNLOAD