This paper presents a new topology for high torque high performance permanent magnetic gear. The proposed topology is extensively studied thought series of simulations with ANSYS Maxwell, an electromagnetic solver based in finite element method. Parametric analysis provides a first geometry to be optimized, searching which variables are the most important to achieve high torque values and robustness for rotor eccentricities. 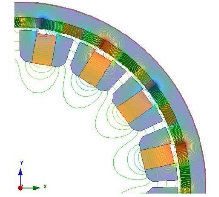 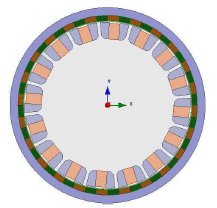 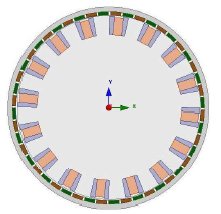 After an optimum design is achieved, the confrontation of torque and the response of each design to a rotor displacement are studied. The final optimized permanent gear can deliver 147kNm/m3, with less interference to static eccentricities.

The novel topology for a high performance magnetic gear has been studied from its topology. Parametric variations of some dimensions could provide a good start point for a optimization. Since the main objective was to study the behavior of unbalanced forces caused by a rotor static displacement, several comparisons were performed in order to ensure that the most important differences between the several topologies were considered. The interaction between the different variables and the confronted optimization objectives made it possible to reach an optimum design for the magnetic gear. The polymeric material increase in the optimized topology can be simply explained by the decreasing inner rotor active material, and does not represent improvement to the later magnetic gear. High torque values were obtained from the optimized topology, representing a torque per volume density of 147kNm/m3, which is extremely high when compared to other similar topologies. The 0Hz frequency resulting force is substantially reduced in the optimized magnetic gear. The same does not occur for the other two main frequencies, which may be explained by the substantial material reduction, or by the stator permanent magnets geometry. Permanent magnets with more energy could be used for this study to increase torque, but as the construction of a physical prototype requires market available magnets, Neodymium permanent magnets were used instead.

Future works will attend the construction of the optimized magnetic gear so comparisons between experimental and simulation results can be realized.