Noise Sensitivity Characterization in the Context of the Environmental Design Space

Author(s):
Matthew J. LeVine (School of Aerospace Engineering, Georgia Institute of Technology)
The international aviation community has grown increasingly interested in the environmental impacts associated with aircraft noise and emissions. Aircraft noise is one of the most significant environmental impacts of aviation, and it is the most common source of complaints from communities, particularly those in close proximity to airports. Studies have shown that regular exposure to aviation noise can have both behavioral and physiological impacts. Noise metrics have been established in order to quantify this impact on the surrounding community. The Aircraft Noise Prediction Program (ANOPP), the noise assessment tool included in the Environmental Design Space, a physics-based vehicle-level tool capable of estimating source noise, exhaust emissions, and performance for future aircraft designs under different technological, operational, policy and market scenarios, was used.

The general procedure for the ANOPP sensitivity analysis with respect to its function in EDS. The steps include identifying the EDS input variables that are mapped to ANOPP inputs within the EDS environment, building designs of experiments (DOE) on these design variables, and exploring their influence on the ANOPP outputs. The initial design of experiments consisted of 92 design variables, 29 of which were ANOPP suppression factor terms. These variable types include aerodynamic variables, engine design variables, airframe design variables, and additional miscellaneous variables. The sensitivity analyses of the responses were performed in modeFRONTIER due to the availability of several statistical tests as well as the fast calculation times. While many statistical tests were available, including Analysis of Variance (ANOVA), student t-tests, and half-normal probability plots, the latter was chosen for its visual clarity as well as its inclusion of both factor effects and interaction effects. Understanding the physical design variables that influence DNL contours is of great importance to the international aviation community. Awareness of these factors will provide insight to both engineers and policymakers as they pave the way for the next generation of quieter aircraft, and in the near term these results will help in the development of screening tools for rapid decision making concerning technologies for reducing the environmental impacts of aviation. A few important conclusions can be drawn from the sensitivity studies for this report: design variables for the airframe have the greatest impact on approach noise; design variables that drive the engine size/bypass ratio have the greatest impact on departure noise; engine-sizing variables can also contribute to approach noise due to thrust reversers. 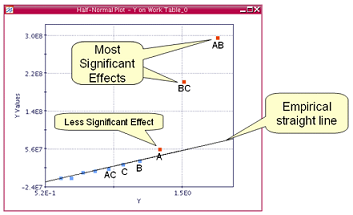