The coming of higher tall buildings, of longer span bridges and of wider large structures has been made possible owing to increasingly lighter structures. The lightest in absolute are the structures made of different arrangements of cables and/or of cables and struts. As they work only by axial tensile forces, the structural geometry and the pretensioning intensity applied to the cables are closely related. The hybrid tensile structures are spatial pin-jointed assemblies, made of cable and struts and designed according to engineering intuitions. They are usually employed as cable domes to roof in large areas. The paper deals with cable domes design and study the role of the cable prestress and of the prestress optimization. In particular it is shown how, for a generic spatial truss, a suitable cable pretensioning makes us able to assign a geometrical stiffness to the whole structure and, in this way, to improve its overall behaviour. 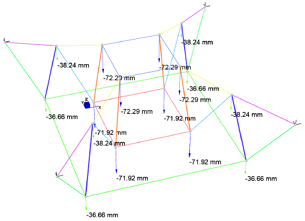 In this paper, a matrix theory suitable for the analysis of a spatial pin-jointed structure is recalled and the role of the cable prestress and the optimization of the prestress distribution and of the prestress intensity is studied. In a second part of the paper an optimization procedure is presented. The algorithm chosen for this study is a genetic algorithm available in modeFRONTIER.
In addition to the prestress system, two sets of loads are considered: a) the structural weight, and b) a live vertical load q = 5 kN/m2, uniformly distributed over the dome. The constraints of the problem are: 1) a constraint on the maximum displacements of the dome, 2) a constraint on the cables resistance (the forces must comply with the resistance provided by the standard sections with a safety margin), and 3) a constraint on struts instability. Such a procedure allows searching a solution at the same time of minimum weight and respecting given technological constraints, as shown in a final example. The displacements and the internal forces in the elements required to assess the fitness of the individual have been computed through the Finite Element Program Cable3, implemented in Fortran language. The program is able to analyze the load response of a general 3D pin-jointed truss, by taking into account both mechanical and geometrical non-linearities. The optimal solution has been also studied with the commercial finite element software Straus7.
LOG IN TO DOWNLOAD