SOLUTION - To study the numerical solution of the windscreen de-icing process, a computational fluid dynamics (CFD) method has been chosen. The numerical model consists of a car compartment geometry, windscreen and duct systems, including their material properties. The aim of this numerical model is to predict the de-iced pattern area. In modeFRONTIER, Latin hypercube and full factorial sampling are considered for the study. The semi-transient method has been used, from which the main output is the temperature distribution on the windscreen at different times. The input that varied in this case is the distribution of energy over the defroster duct outlet. The output is the temperature on the windscreen as a function of time, especially the temperature distribution in the small requirement areas (C-P & C-D). 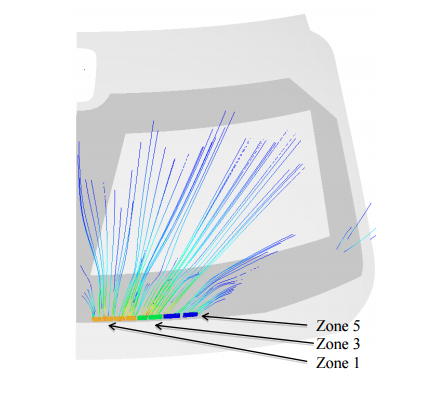 BENEFITS -  Results are seen in the scatter plot above, depicting factors versus response that show the percentage of the ice free area. In Figure 5-9, increasing energy1 until dashed line and after that decreasing energy1 determined the behavior of the response. The dashed line can be considered as a local extreme. As long as the design settles in the vicinity of the dashed line, the design is robust.