In this paper we describe a new method for the aerodynamic optimisation and inverse design problem resolution. This method is based on the coupling of a gradient-based l optimiser with a neural network. A Navier-Stokes flow solver is used for an accurate computation of the objective function. At first, the neural network, which has been trained by an initial small database, is used by the gradient- based optimiser to obtain, by the interpolation of the design sensitivities, a new design point, which is then computed by the Navier-Stokes solver in order to update the neural network training database for the further iterative step. 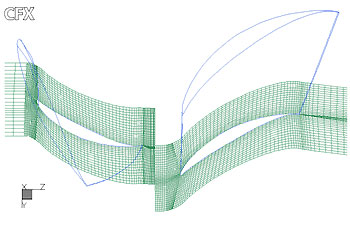 Since the neural network provides the optimiser with the derivatives, the objective function has to be evaluated only once at every step. By this method, the computational effort is significantly reduced with respect to the classical optimisation methods based on the design sensitivities, computed directly by the flow solver. The method proposed has been positively tested on the inverse design of a three-dimensional axial compressor blade.The objective of this inverse design problem is to find a corresponding stator blade geometry that yields a prescribed target pressure distribution, starting by an arbitrary geometry.

The target pressure distribution corresponds to a stator blade of an axial compressor that has been previously optimised. For the simulation of the flow through the compressor we have defined a 3D multi-block structured mesh, completely parametric.

The mesh is by four main blocks. The two central ones contain the rotor and stator blade geometry, both defined properly by four sections and a total of 15 variables: aspect ratio, 4 points co-ordinates used to modify the camber curve, the thickness scale factor, the blade angle defined for 4 sections from the hub to the shroud, the curvature of the profile defined by a coefficient for each one of the sections, and the stagger or shifting ratio of the line in tangential direction. The objective function chosen is the of the sum of the absolute value differences of the blade pressure distributions along the surface with the target pressure distribution. As it is possible to see in fig.2, after only 27 iterations (in combination with the Neural Network to compute the derivatives required, and updating the database with the computation of the new point defined by BFGS), that corresponds to 27 real computations, the objective function has been reduced to a value of 33Pam, that gives a blade geometry very close to the target (see fig.3 and 4).