How ESTECO’s first Brazilian customer optimized the largest semi-submersible platform in the country.

Last year Petrobras, a state-owned publicly traded Brazilian multinational energy corporation headquartered in Rio de Janeiro, Brazil, launched their P-55 offshore platform, which was initially sized using modeFRONTIER. In order to tackle the complex problem of multiple variables, constraints and objectives, as well as a desire for a rational approach to the design process, Petrobras turned to modeFRONTIER to help them with the optimization study. 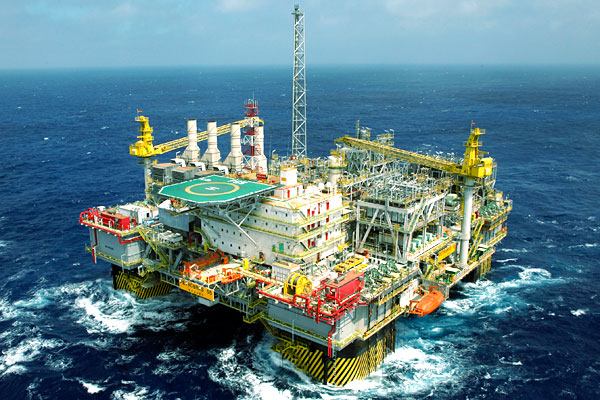 ​Defining the main dimensions of an offshore production platform is a complex problem due to the many variables that can influence the behavior of the platform, including: deck area, deck weight, subsea systems interface, stability issues and wave-induced motions. The dimensioning process is affected by many constraints imposed by more stringent motion requirements, construction and assembly considerations, as well as by the draft limit of shipyards. Ultimately the goal is to reduce to a minimum the vertical wave-induced motions which can cause fatigue damage to the steel catenary risers (the pipes which bring the oil from the seabed to the platform).

Dr. Mauro Costa de Oliveira, a naval architect at CENPES, the Petrobras Research Center in Rio, and the first user of modeFRONTIER in Brazil, used the software to integrate the hydrodynamics analysis tool, WAMIT, and CENPES’s own stability software, SSTAB. He then went on to run an optimization study in which modeFRONTIER varied 5 key geometric parameters of the platform with the objective of minimizing, subject to numerous constraints, vertical motion of the platform due to wave loading.

During the study, the structure was analyzed for multiple conditions: quayside, transit and in operation with 2 different wave load conditions. Using one of modeFRONTIER’s genetic algorithms to drive the search process, Dr Costa de Oliveira was able to identify the designs which met all the constraints, and from among those to select the configuration with the lowest riser vertical motion. As can be seen in the scatter chart in Fig. 1, the feasible region (ie the part of design space where all constraints were respected) is very small - to identify this region without the help of a tool like modeFRONTIER would have been almost impossible. The final design is shown in Fig. 2.

modeFRONTIER proved to be invaluable in helping us to address the complex problem of selecting the main dimensions of a deep water floating production system, where there is potentially a huge number of alternatives to be evaluated.Dr. Mauro Costa de Oliveira - Naval architect at CENPES, the Petrobras Research Center in Rio

The software - Dr Costa de Oliveira says - allowed us to rationalize our approach to the problem and conduct an automatic search, driven by a genetic algorithm, which quickly identified the best design which met all constraints. The post-processing tools also proved to be extremely useful for the conceptual phases of the design of a deep water floating production system”.

In January 2014 the P-55 began operation in Brazil’s Roncador field at a site where the depth of the seabed is 1,800 meters. At 52,000 tons and 10,000 square meters in size and displacing 105,000 tons, the P-55 is the largest semi-submersible platform built in Brazil and one of the largest of its kind in the world; it is capable of processing 180,000 barrels of oil per day, compressing 6 million cubic meters of natural gas per day, and injecting 290,000 barrels of water per day.